Philip Guston: Laughter in the Dark, Drawings from 1971 & 1975, a timely show of Guston’s Poor Richard series and other drawings, plus three paintings from 1971 and 1975, comes along just as Americans are barreling down the final mad slope of our angsty 2016 Presidential Campaign roller coaster ride.

Most of us suffer and rant our ways through trying times like these, barely acknowledging our impotence in the face of politically generated outrages. This campaign season, most Americans have been so bombarded with the histrionic fireworks of fake scandals, sleazy sound bite news programs and social media forgeries that they have forgotten that there are similar times to look to for guidance and perspective; we’ve all thrown up or hands and declared a Twitter war on our mortified democracy. We seem to feel as though this is the most we can do: work and rant and stare blandly at satiric gifs.

We forget what a wild ride the 60’s were with the Vietnam War, the assassinations of Martin Luther King Jr and Senator Robert F Kennedy, violent college campus riots, and the terrorist Weather Underground movement, just to list a few nightmares. Guston was already a pivotal artist in circles which had been (much to his growing dismay) acknowledged as “the New York Art School” and “the abstract expressionists”:

“So when the 1960s came along I was feeling split, schizophrenic. The war, what was happening to America, the brutality of the world. What kind of man am I, sitting at home, reading magazines, going into frustrated fury about everything — and then going into my studio to adjust a red to a blue?”

As he reconciled his abstract work with his personal struggle to grasp the tumultuous events of his day: Guston was left feeling torn between his private soup of vitriol and his abstract painting process. It felt too light, divorced from what was real. He referred to abstraction’s expulsion of the object from painting as a “catastrophic” event, a cause for mourning. And he felt, pushed, gradually toward a vague sort of re-figuration and then— quite suddenly, to overt satire.

But Guston’s evolving disillusionment with the AbEx movement, which he voiced in interviews throughout the late 60’s and the gradual introduction of solid forms and autobiographical references into his painting did not prepare the art cognoscenti for what they were to see at New York’s Marlborough Gallery in 1970. Greeted with unabashed cartoon figuration—piles of shoes, hooded figures huddling with cigarettes, and bare bulbs in a sickly pink and red pallet, critics panned the show and savaged the artist.

“It was as though I had left the church,” Guston mused. But satire became his new medium.

These days it’s an artspeak cliché to say that an artist has developed a vocabulary, but Guston really did: an almost hieroglyphic one where bed rest alludes to melancholy, hoods equal conspiracy, cigars and golf clubs, collusion, and light bulbs signal some sort of existential blindness. 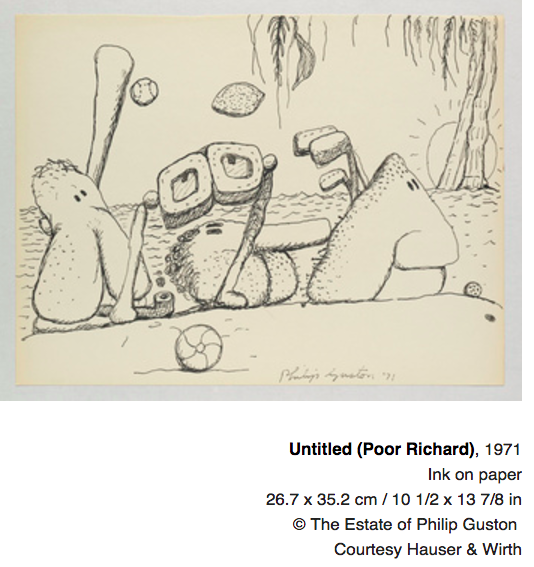 In July and August 1971, Guston, inspired by close friend Philip Roth’s newly published book, Our Gang, undertook a manic series of drawings that depict Nixon’s nefarious career arc with equal degrees of disgust and pathos. Laughter in the Dark brings together 180 of those satirical works in a scene by scene linear show that operates much like a walk-through graphic novel. Philip Guston’s Poor Richard series plus over 100 additional drawings and three paintings are brought together for the first time by co-curators Sally Radic, of The Guston Foundation, and Musa Mayer,  daughter of the artist. Together Radic and Mayer have brought both  deep knowledge and intimacy to the research and presentation of this collection.

They have also provided  a thoughtful timeline of Nixon’s public life which can be used both as a reference to follow Guston’s plot-line, and, hopefully, as a way to add perspective to our current state of madness.

Indeed, Ms. Mayer intimates that the show was put together in a brief six weeks, partly in order to have it up before the election, stating, “I’m hoping the drawings may remind people of what can happen.”

She has succeeded because they certainly do. And although Laughter in the Dark has turned the gallery into a virtual clarion call for political involvement, Guston’s humor provides a much-needed catharsis. Keeping in mind that by the time this show ends, we will have a new president, the less scholarly among us may benefit by letting the raw anger, the hilarity, and the downright sadness of it all wash over them as they pass from frame to frame.

Meanwhile scholars may visit the show to remind themselves of Guston’s own dark broodings and the roots that can be found in these drawings of his subsequent autobiographical iconography. The show opens up with two paintings of Nixon lying awake in bed, likely contemplating lonely sleep inhibiting kōans. Hooded figures abound, the familiar bare bulb, cigarettes and heavy shoes provide the now-warm familiarity we assign to post 1969 Guston. But more to the point, the series shows a very clever, and very quick development of the Guston method of simmering visuals down to the simplest marks.

In the final room, the Phlebitis series featuring Guston’s monumental San Clemente should move anyone to genuine awe.