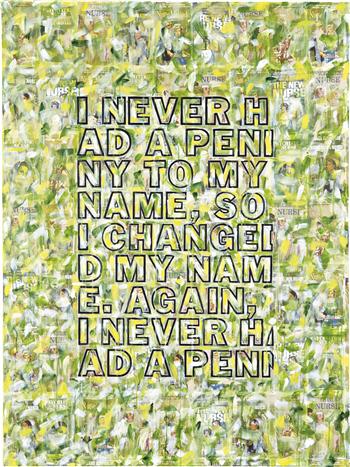 It’s Not Funny if You Have to Explain It

“Richard Prince’s Joke Paintings have remained a constant high point within the artist’s output for over two decades.”

Mm-hmm: Yes. Yes they have remained the high point. Sadly.

Then, having prepped us with the bad news, dePury goes on to do the WORST thing you can ever do to a comic: they EXPLAIN his joke!

“The work is technically lush, utilizing both acrylic and collage. The centered block letters read, in nine rows, “I never had a penny to my name, so I changed my name. Again, I never had a penn.” Prince’s obvious joke is corroborated by letters cut in half, and even missing with respect to final “y” in penny. One must assume that he did not have enough to his name even to get the text set correctly.”

Yeah. Heh heh. That must be it.

Oh, but there’s a leetle bit more: in case you missed that other funny…

“Interestingly, the joke Prince prints across the present lot is entirely unrelated to the subject of nurses, and thus the viewer might be left wondering what the connection is between the subject and its background. …If what he has collected also amounts to the oeuvre he has amassed, perhaps it’s simply natural for one piece to pratfall over another.”

Thank you. We might otherwise have assumed that Richard Prince just had a few nurses to get rid of.

“Street Art” is Just a Word for “Emerging Designer”

We’ve all seen it. Shep, Damien, Banksy… they started out hanging from the eves with a spray can, and ended up hawking t-shirts and limited edition art objects online.  Yet even the advent of “Mr. Brainwash” didn’t really force us to just come out and SAY it.

But hell, now it’s time: The streets are just a starter kit for emerging artists with “urban” flavor: the goal is a corporate brand like OBEY or Objective Criteria.

Still, The Guardian sought out, Jeffrey Deitch, for the final word on street art as “big business.”

“Today, somebody does a tag in Russia, China, Japan, or Africa, a friend photographs it and within a few hours it’ll be viewed on websites all over the world,” says Jeffrey Deitch, director of the Museum of Contemporary Art in Los Angeles, which recently opened a major show on the subject. “I think you can make a good case that street art is now the most influential art movement of the past 30 years. The penetration of urban culture is huge, and it’s influencing everything from skateboard design to high fashion. Some of these guys have even been hired to design Louis Vuitton handbags.” 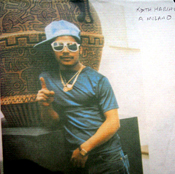 Angel Ortiz, aka Little Angel, or, better known as LA II, or by his elaborate LA ROC tag which decorated many of his collaborations with Keith Haring, has languished in the shadows of his collossally famous mentor for 2+ decades. And now, he has been arrested for grafitti one time too many (three occasions) in a short period, and faces a felony charge.

Since his youthful adventures with Haring, Ortiz has waxed obscure, finding himself unacknowledged by Keith Haring’s dealers and biographers to the extent that he claims to have found some of his collaborations with Haring in sales and auction catalogs without any attribution to him and without receiving any compensation.

An unwieldy personality, Ortiz, who was very young when he began working closely with Haring, never managed to parlay his 15 minutes of fame into anything big enough to satisfy the star treatment he got when he toured with Haring at the age of 15. Promised that Haring was setting aside a trust for him, Ortiz found, upon Haring’s death, that no such fund existed. He has never recovered from this disappointment, nor from his subsequent struggles for acknowledgment.

This arrest comes simultaneous to receiving a VIP invitation to “Art in the Streets” where one of his collaborations with Haring is on display. It also comes upon the heels of a recent show at Dorian Grey Gallery, a rarity for Ortiz who has not shown often in the United States.

It is arguable that Ortiz has done fairly well. He even has a following in Italy and sells his works for prices between $500 and $5,ooo.

But a, perhaps bitter, Ortiz has been more than a little self-sabotaging. He has, for example, been arrested for painting an unauthorized mural on an Urban Outfitters in the East Village despite the fact that he is one of the company’s official artists.

He was also arrested recently for spraying the Kenny Sharf mural at Houston and Bowery Streets, a site he is fond of tagging ever since he added flourishes to the Kieth Haring trubute mural that occupied the wall in 2008.

However, these charges, which ironically add up now to a felony are not the worst of Ortiz’s rather startling list of past arrests, some of which have been for drug charges and car theft.

The story of Angel Ortiz is a sad and complex one. So young when he attached himself to Keith Haring, he was exposed to fame and to a world of promise which he found subsequently withheld for various reasons, many beyond his control. It has been argued that Ortiz’s influence on Haring was pivotal to Haring’s development and to his later, more decorative and intricate style. Indeed there are those who continue to champion Angel Ortiz and who feel a great deal of indignation over how history has treated him.

Spew artist, Andres Seranno’s ‘Piss Christ’ met with violence yesterday at the museum of contemporary art in Avignon, France, when two crazed Catholics, not happy with mere spray paint, pulverized the work with instruments of violence, including an ice pick and a hammer.

It’s not a very original move. Paving the way for this quaint Catholic tradition, a copy of “Piss Christ’ was similarly demolished by two OTHER angry Catholics in 1997 as it hung in a museum in Australia.

Always ready to pick a fight when accused of idolatry, sensitive Catholics have been decrying the ‘Piss Christ’ ever since Seranno first emptied his bladder on it. But these holy renegades did not stop at ravaging the controversial photograph; they went on to vandalize another of the museum’s holdings before they ran away.

“I’m disgusted, Yvon Lambert, director of the museum told France Info, “Two works, dammit! They attacked the Piss Christ, that’s one thing, but they also attacked a beautiful photo of the hands of a nun. The ignorance of these people is unbelievable. ”

The painting of a nun’s hands to which Mr. Lambert refers, is another work by Serrano, entitled ‘The Church(Sœur Jeanne-Myriam)’: it has been revealed that the work was damaged in a struggle as museum guards tried to pry a hammer away from one of three (3) assailants. I had cited two in the story above.

There is speculation that the attack may be connected to protests held outside the Collection Lambert the day before. They were demanding that, Serrano’s ‘Immersion’ as it is properly called, be removed from the currently running  “I Believe in Miracles.” show. The museum will continue to display the works in their damaged state. 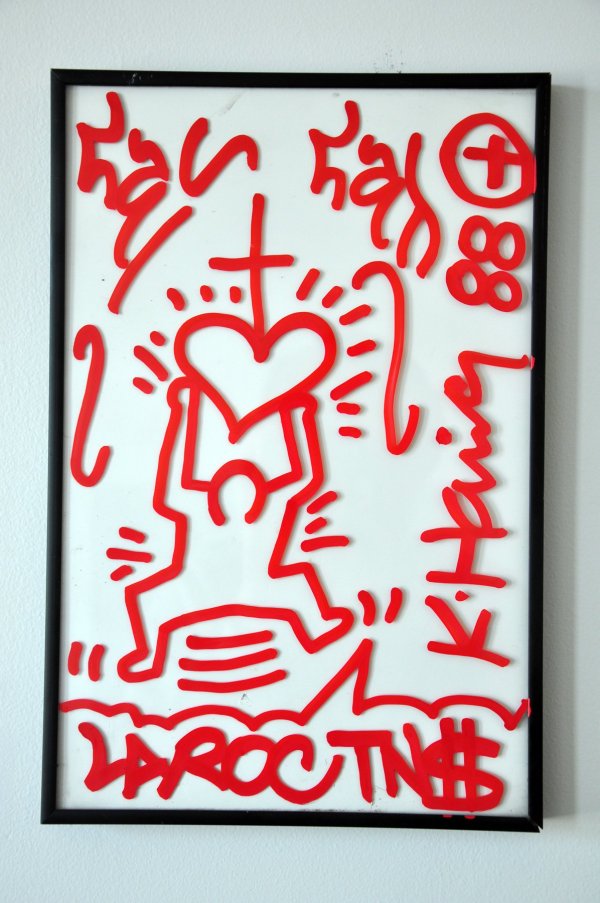 Lee Wells, of Stratus Global Partners, suspects he may have landed on a very good deal while “manning the Dorian Grey Gallery” on Sunday:

The way  he tells it: “A guy walks into the gallery and says ‘I used to roll with Haring and have a piece I want to sell and if you’re smart this is your lucky day because I need the cash today.'”

So he buys it because “the confidence of the mark tells me it just may be real,” and because “the lower tag is by long time Haring collaborator LA2 (Angel Ortiz).”

He spent “$99” on it, so the risk isn’t huge, though–the windfall may be — still, I admire his confidence.

Asked what comes next, Wells replied:

“Once we get it authenticated we will figure out what to do. It’s my piece and should I decide to sell it, I’ll will most likely share proceeds with LA2 and give a little back to the guy who sold it to me (maybe the gallery too) Its a pretty little piece from 1988.”

Curious about the possibility that a confidence trickster with a bit of niche art knowledge (and a confident hand) might be able to make a small pile of money by forcing hurried sales on galleries and collectors, I began a search for fake Harings — found nothing (so far) — but I did stumble upon a very fine site selling fake art to all the would-be collectors out there who scorn posters but must have a Keith Haring on their wall.

On iFalsidiAutore.it, you can search for “replicas” by artist, title or subject. I would have posted an image of their Kieth Haring “Wolf” but they warn that “The image of the fake painting on sale is protected by copyright.”