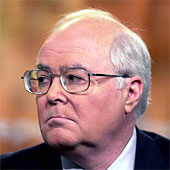 Last Wednesday the Catholic League’s William Donohue told The Washington Post that, “You have to know when to step on the gas and when to step on the brake.” Ironically, he was speaking about his own turn to step on the brake, having given the gas already to his thrust to remove David Wojnarowicz’s A Fire in My Belly from the National Portrait Gallery’s current Hide/Seek exhibit. But even as he spoke, activists, fellow artists, local galleries, The Andy Warhol Foundation, and Smithsonian curators were stepping on the gas.

Mr. Donohue was telling reporters that his work was done and he would not be attending a dialog at the New York Public Library that night, where Hide/Seek curators Johathan Katz and David C. Ward were scheduled to speak.

Katz and Ward, who have organized what the Post called “perhaps the highest-profile and most canonically scholarly exhibition of gay and lesbian art ever mounted in a major museum” were in danger of having months of careful work upstaged by the controversy surrounding the Wojnarowicz yoink. They gave a scholarly lecture, holding their grievances at bay until the question and answer period. Reluctant as they were to vilify the Smithsonian during a time when cultural institutions should be presenting a united front against what Katz calls “an American Taliban,” they did express disapproval of the hasty decision to edit Hide/Seek without even, as Ward puts it, “a fighting retreat.”

Meantime, artist AA Bronson had asked that very day, that his portrait, Felix, be removed from the NPG as a protest: “To edit queer history in this way is hurtful and disrespectful,” he wrote in his letter to the National Gallery of Canada (current owners of the work). Though they respect Mr. Bronson’s decision, whether or not the gallery has the legal right to remove the work remains to be seen.

While the Smithsonian’s thumping continues apace, New York activists are preparing to mirror the last week’s protest marches in Washington, as they spread word of a march this Sunday that will proceed from The Metropolitan Museum of Art to The Cooper-Hewitt/Smithsonian at 91st Street.

Protest against the Smithsonian

March begins at:
The Metropolitan Museum of Art
From there it will proceed to The Cooper-Hewitt/Smithsonian at 91st Street.

Via NewsGrist blog, This latest correspondance from artist, AA Bronson, to Martin Sullivan, Director of the National Portrait Gallery. Apparently Sullivan phoned Bronson to tell him that The National Gallery of Canada could not cancel the loan of Bronson’s work, Felix, due to the nature of their loan agreement. Mr Bronson responds below.

To: Martin Sullivan, Director of the National Portrait Gallery

Thanks for telephoning me and I am writing to confirm our conversation.

You began by offering to bring me to Washington to see the exhibition, at the Museum’s expense.

You reported that the National Gallery of Canada was unable to cancel the loan because of the loan agreement, but that Marc Meyer, the Director, urged you to cooperate with me. (My understanding from Marc is that they CAN terminate the loan, but they would rather not do so on political grounds. Marc, maybe you can clarify).

You described my work “Felix, June 5, 1994” as one of three works given a major amount of space in the exhibition. It was because of that space that the museum was unable to give as much space to the videos in the exhibition as they really needed. You withdrew the David Wojnarowicz video because you felt it wasn’t being given “proper respect” because of the lack of space. I am not positive that I got this right, but I think you said that this was done BEFORE the Catholic League published a statement about the work, and you claim that a journalist goaded the politicians into making their statements. Please don’t take offense if I say that this all sounds exceedingly convenient. Not to say that it isn’t true but it is not convincing.

My proposal is that you reinstate the video, but in its complete form, as the artist intended (you were showing only a clip before, I understand, which already constitutes a prior censorship of the work).

If that means removing my work in order to make an appropriate space for the video, in its full form, I give my permission to do just that.

One thought on “More, More, and Still More Trouble for Beleaguered Smithsonian”