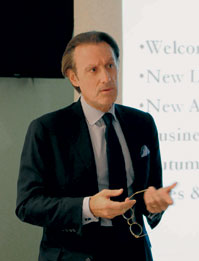 Christie’s recent top management shuffle has inspired a good deal of speculation regarding the strategic intentions of owners, François Pinault and his investment firm, Groupe Artemis SA.  Does Artemis, which acquired the auction house in 1999 for $1.2 billion have secret plans to sell in the near future?

Sprung upon with announcements of a new CEO, Steven Pleshette Murphy, formerly president and CEO of Rodale publishing, and the promotion of former CEO, Edward Doleman to chairman, Christie’s execs can’t help but wonder what to expect next.

Kept secret until its announcement via a Sept. 20th e-mail to worldwide staff, the news apparently caused quite a shake up, not only because it was so sudden and unanticipated, but also because Murphy was chosen over seemingly more likely candidates like Marc Porter, the chairman of Christie’s America, and François Curiel, president of Christie’s Asia.

Artemis, meantime, denies all rumors of an impending sale, claiming it holds long-term plans for Christie’s which is, they say, one of their “strategic assets,” producing sales of $2.3 billion in the first half of 2010.

However, asked by ArtInfo’s Judd Tully about whether Christie’s has any more surprises in store, Murphy, Christie’s very first American born CEO, said, “There will be more to say in a few months.”