“Get them into debt … Get them to buy lots of houses, … get expensive habits and expensive girlfriends and expensive wives.”
~ Mary Boone (on how to get artists to produce) 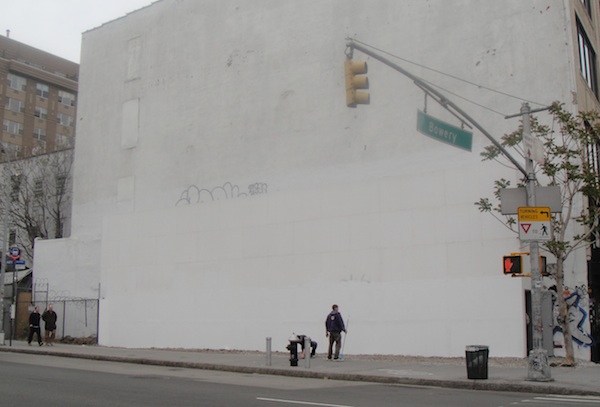 The wall will be finished in time to promote Fairey’s upcoming show at Deitch Projects, May Day: a series of portraits of revolutionary personages who, “started out on the margins of culture and ended up changing the mainstream.”

But a few steps too many into mainstream, and one may not end up changing it, but only changing how one makes money in it.

For example: the May Day show will reflect the incendiary mood of spray can and eaves-clinging guerilla art, with it’s tribute to political activism; in the meantime it will also serve to promote Shepard Fairey’s OBEY clothing line. And the OBEY clothing line, will spring a pop-up store on Orchard Street coinciding with the Deitch show, thus providing a promotional supplement to it.

As if there’s not enough money in all that marketing, recall that this will be Jeffrey Deitch’s last show at the Wooster street location before he closes shop and moves off to LA MOCA. The draw will already be huge.

Addendum: On April 22, as Shepard Fairey and crew were clearing out and getting ready to go get some dinner after finishing the mural on Houston Street, I, and my husband, David Kaplan, a writer for PaidContent, stopped to chat with him. David asked him some questions about his law battles with the Associated Press. Here’s a link to the story.