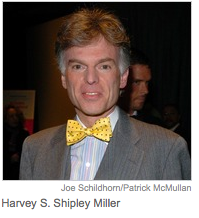 One cannot but snicker at the NYT’s drole headline: “Foundation Promotes Art as Well as Sole Trustee” which heads up Kevin Flynn and Robin Pogrebin’s story about Harvey S. Shipley Miller, trustee to the Judith Rothschild Foundation. In eight words, the elegant headline sums up the entire story so well that, really, one could simply move on,

But there’s still a lot of fun in the details: Ms. Rothschild, died in 1993, having established a foundation that was to use her personal art collection to promote artists and the arts. She appointed her friend, Harvey S. Shipley Miller, sole trustee, a move which experts agree, is unwise since it lends too much flexibility to that trustee’s interpretation of the foundation’s mission.

Mr. Miller has indeed followed through on the Judith Rothschild Foundation’s mission, donating and selling artworks in order to benefit cultural institutions throughout the U.S.

But he has also:
• Set a $200, 000 salary for himself
• Lived, for years, in Ms. Rothschild’s Park Avenue town house
• Donated $130,000+ in foundation money to University of California law school which subsequently used some of that same money to create a fellowship named after him.
•And, NYT reports “was given coveted seats on important boards and committees at institutions like the Whitney Museum of American Art, the Metropolitan Museum of Art and the Museum of Modern Art, where he has served alongside the likes of Ronald S. Lauder and David Rockefeller Jr.”

The lone trustee, is an unusual model because most foundations recognize a need for oversight. Nancy E. Kelly, who is on the advisory panel of Charity Navigator, tells the NYT , “This kind of governance fails to protect against possible conflicts of interest.”

Error: Twitter did not respond. Please wait a few minutes and refresh this page.